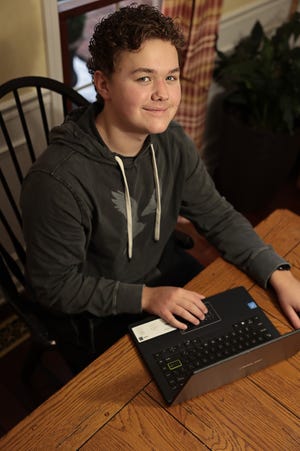 Most people go to a website expecting it to work perfectly and give the information they are seeking. They want ease of use and a quick response. Very few consider the process it takes to make that happen.

That is where 16-year-old Trey Greer steps in.

Greer can design websites and he now has a degree to prove that. At the age of 15, just a few days shy of his 16th birthday, he earned a Front End Web Development Tech Degree through the West Virginia Coding Club and Treehouse, a nationally accredited certified tech-ed company.

“Most people are at least in their 20s before they get a degree like this,” Greer said. “I really wanted to test myself and shoot to get it before I was 16. I made it just under the wire.”

Designing websites is a simple phrase that comes because of a complex job called coding.

There are several computer languages that are used in web design. Greer is proficient in three of the most important and is learning a fourth.

“I used HTML for content, CSS for styling; Java is the interactive portion,” he said. “Java is used in a lot of computer games. Now I’m learning PHP which is more geared to developing websites.”

The Ripley High School student got his coding start in middle school.

“My dad and I were at the school on a Saturday trying to learn more about a grade reporting program and the principal stopped in,” he said. “Dr. Corena started talking about coding and showed me how to put my name in a program.

That simple three lines of code sparked an interest in Greer that led him to join the West Virginia Coding Club which paved the way to earning the tech degree.

Dan McElroy, founder and director of the state coding club, said Greer was able to take advantage of a partnership the organization has with Treehouse.

“There are over 300,000 participants in Treehouse programs,” he said. “Trey has made a remarkable achievement at a very young age.”

To earn the degree took Greer about 12 months. While he said most completed it in nine months, he had a little more of a challenge.

“I did this on my own time, on weekends,” he said. “I still had to keep up with all my schoolwork too.”

To obtain the degree required nine stages and a final exam. In the process, Greer said he got to do some interesting projects.

“I designed a Wheel of Fortune type game and an interactive photo gallery,” he said. “One thing that on the surface doesn’t look exciting was pretty neat. I produced an online registration that was the first time I had ever coded something with straight-forward text.”

Each step became more difficult, and each project was reviewed by an experienced web developer.

“It was pretty stressful honestly,” he said. “But what kept me going was knowing that the result would be worth it. That’s pretty much how I’ve managed all the challenges I’ve faced.”

That dedication to achieving his goal is a trait that makes his parents, Reg and Amanda Greer, particularly proud.

“Trey has always been very driven to achieve the goals he sets for himself,” Amanda said. “We have high expectations for our kids because we want them to do better than we did. To see both our kids accomplish so much so early is mind-boggling. Most importantly, we’re proud that he’s a great young man and he’s following his dreams.”

Amanda will soon benefit from her son’s expertise.

As part of a competition project for the Future Business Leaders of America (FBLA), Greer and his partner William Matheny are designing a new website for her business. As a professional photographer, website design is particularly important.

“Her current site is ok,” Greer said with a smile. “But it can be so much better. We’re going to help the customer find what they need quicker and keep things better organized with good color.”

“You definitely can’t put yellow and purple together because they clash,” he said. “I go to a color wheel and find colors that are totally opposite, and they work really well.”

Greer hopes keeping an eye on a goal will lead him to his dream.

“I really want to go to Harvard to major in some field of computer science,” he said. “It’s a prestigious school but what I liked was seeing how happy students were to be there.”

Future projects are constantly in his ‘mental blender.’

“I’m always thinking that there’s got to be a better way to do things,” Greer said.

Honing his skills and looking for ways to make life easier for people are two of his ultimate dreams. This tech degree is only the beginning.

“It’s kind of amazing that this all stemmed from those three lines of code back in middle school,” Greer said. “This degree really does show that no matter where you’re from, even a small town in West Virginia, you can do anything.”