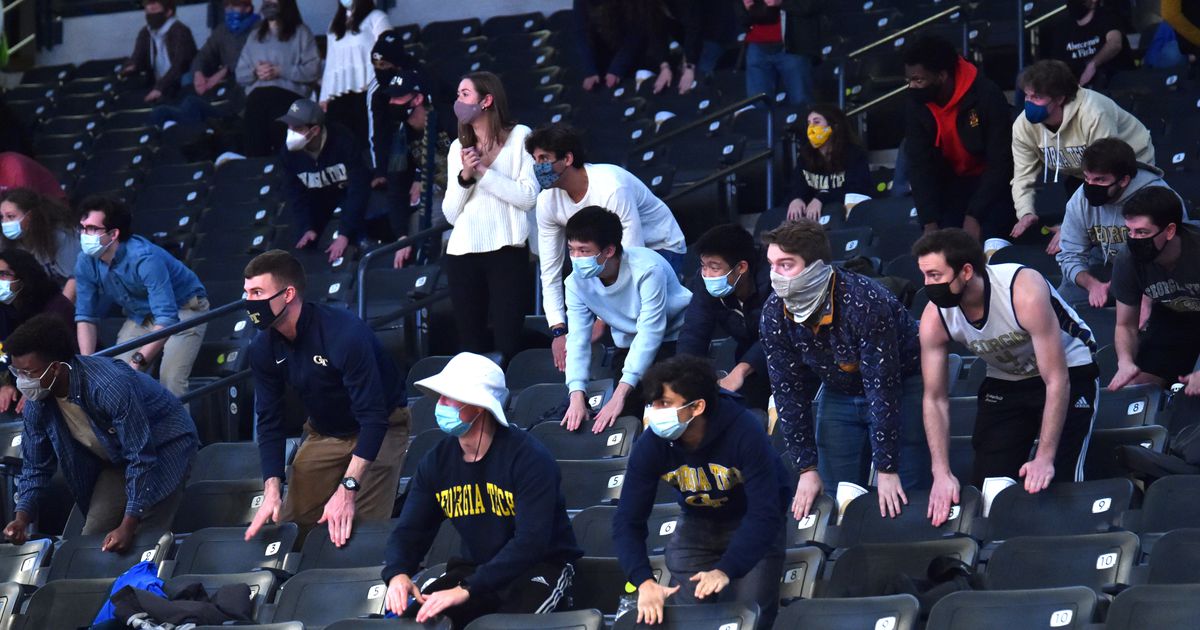 In the ACC, Tech is in the minority with its attendance policy this winter. In following social-distancing guidelines for COVID-19, the institute has set an attendance limit of 1,200, with 900 of the seats set aside for students (and faculty and staff when the allocation isn’t filled) and the remaining 300 for guests of the team and athletic department. McCamish’s full capacity is 8,600.

Eleven of the 15 schools have caps at 400 or lower. Eight schools – Boston College, Duke, Miami, North Carolina, N.C. State, Notre Dame, Syracuse and Wake Forest – aren’t allowing any fans, with some permitting a small number of guests. Virginia and Virginia Tech have a 250-attendee limit and Pitt’s is 500, including players, coaches and staff.

“I think the band’s been great, the students have been great,” Pastner said. “We’re very appreciative.”

In this strange season, where gyms quiet enough to hear coaches’ instructions from the upper deck have become the norm, having crowds that can get behind their teams (and onto the opponent) appears to be making a difference. Supported by the student body, Tech is 5-0 at McCamish in league play, extending its win streak in ACC home games (started last season) to a school-record 11 games, including a win over then-No. 16 Florida State.

The Jackets toppled the Fighting Irish Saturday after falling behind by as many as 17 points, making it the largest comeback win in Pastner’s tenure. Speaking on the weekly ACC coaches videoconference on Monday, Notre Dame coach Mike Brey was answering a question about Jackets guard Jose Alvarado when he brought up the fan support at Saturday’s game unprompted.

“And, man, are they confident in their building,” he said of the Jackets. “But I think a lot of it, too, is they have created a home atmosphere. No other place have we played where it’s loud. And there’s a band, and it really helps their team. I think it really helps their team. I’m going to talk to my A.D: Can we get the band in in March for a game?

N.C. State coach Kevin Keatts, whose team has played home games in its empty arena, likewise insisted that fan energy influences the game. He said it stood out the most in trips to Clemson and Florida State, both Wolfpack losses.

“It’s crazy, because when you have young guys like my guys, that’s the first time this year that they’ve ever played in front of anybody,” he said. “If you’re able to have at least 1,000 people in your stands, I consider it a sellout, so we’ve played in front of a few sellouts. It does make a difference.”

Prior to the season, Tech officials made the decision to open attendance at games to students (and guests) while barring the general public because of the relative health within the campus community and a desire to reward students for practicing health and safety protocols in a year when they’ve been denied the typical college experience.

While student attendance was minimal for non-conference games, as they were played when students weren’t on campus, the support in league games since the winter semester began has been noticeable.

The pep band, spread out in the end-zone section behind one basket, cranks out “(I’m a) Ramblin’ Wreck from Georgia Tech” and its other standards. The band and students, scattered throughout the arena, chant for defense and roar their approval after dunks and 3-pointers.

They particularly make their presence felt by drumming the metal and plastic seat backs in front of them – one method of crowd support made possible by social distancing – to encourage the Jackets on defense and distract opponents on the free-throw line. The volume is obviously not quite the same effect as a full house chanting “DEFENSE!” but the noise fills the arena.

Perhaps more than at any game this season, Pastner and the Jackets will need the support of their fans Wednesday, when they play No. 9 Virginia. Green plans to be there, saxophone in hand.

“I think it’s been really fun,” he said. “It’s been something where it is definitely different, but in some ways, whether we’re yelling and screaming or banging on the benches, it all kind of slips away for a second and it doesn’t feel any different.”