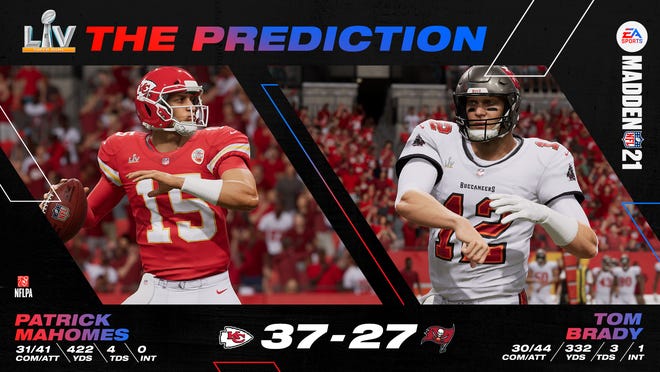 Last week, Sporting News had six of its NFL experts pick the winner of Sunday’s Super Bowl LV. Their predictions were unanimous; the only difference was the point spread between the Kansas City Chiefs and the Tampa Bay Buccaneers.

The Chiefs make it back-to-back Super Bowl wins, the six experts agreed. The narrowest of spreads was three points; the largest, picked by two writers, was 10.

It would be the first back-to-back team to win in 16 years, since 2004 and 2005, when the New England Patriots won under the leadership of quarterback Tom Brady.

That’s the human side of things. What does the digital version envision?

The winner – in a high-scoring game – will be Kansas City, 37-27. An EA press release said the Chiefs had “an uphill battle” and the Chiefs’ “high-powered offense had to go all out battling back and forth with the equally electric Tampa Bay offense, with both teams taking to the air early and often throughout the game.”

Tampa Bay will open the game by making the first score, a field goal, but “Mahomes follows quickly with a 5-yard touchdown pass to running back Clyde Edwards-Helaire,” says EA’s game summary.

The second quarter involves a lot of “back and forth,” with Brady and Mahomes passing for touchdowns. The quarter ends 14-13, Chiefs.

EA’s narrative has Mahomes “coming out hot in the second half with a 63-yard touchdown pass back to [wide receiver Tyreek] Hill … However, Brady answers with a 17-yard touchdown pass to Mike Evans. Mahomes, resilient and determined to win, hits Travis Kelce for a Chiefs’ touchdown to end the quarter.”

With one touchdown separating the teams in the last quarter, Brady connects with Ron Gronkowski to erase the gap. “Mahomes responds by pushing his way into the endzone with a 12-yard run squarely putting the moment in Kansas City’s hands,” concludes EA’s projection. “To end the game, the Chiefs kick a final field goal before the clock runs out.”

As for the quarterbacks: Mahomes threw for 422 yards and four touchdowns; Brady for 332 yards, three touchdowns and one interception.

How’d the humans and computer do? You’ll know Sunday. Check back next week for a quick summary.