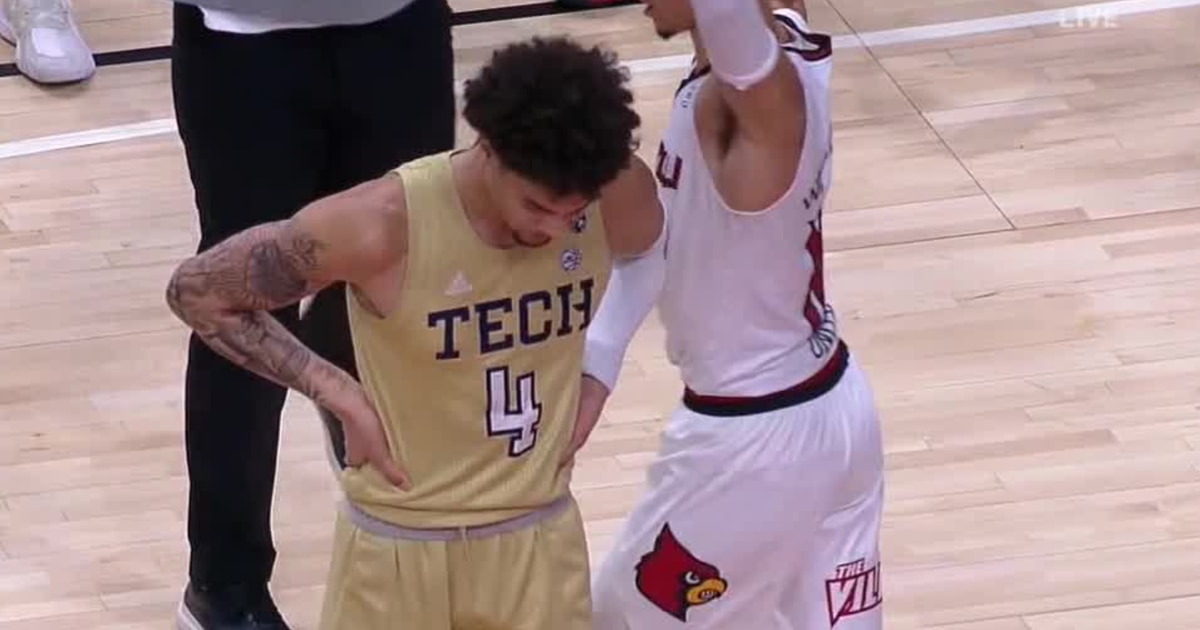 “We just didn’t get it done in a lot of areas (Monday),” Pastner said. “I thought we had some good looks, we just didn’t make them.”

Louisville’s shooting numbers weren’t actually very good – 38.9{b7957974ac228b8f2b2640b69801411293490bb3d7d6382f1a99eb7b62ccaeae} from the field, which was below the averages for the Cardinals and for Tech opponents – but it was the Cardinals’ work on the boards that pulled them through. Louisville scored 20 second-chance points to Tech’s nine, which Pastner described as the difference in the game.

“I thought our will on the offensive glass was really, really good,” Louisville coach Chris Mack said.

Tech’s fatigue revealed itself after halftime. Forward Moses Wright, who played 78 of a possible 80 minutes in the two previous games and then another 40 on Monday, put together another standout game – 15 points, 16 rebounds and a career-high seven blocks, giving him 18 rejections in the past five games. However, the production was tilted to the first half – seven points, 11 rebounds and five blocks. Wright, in fact, was a game-time decision, according to Pastner, after he didn’t practice Sunday because he was not feeling well.

Up 14-7 early on Wright’s contributions, Tech gave up an 8-0 run and then, in the final minute of the half, let a two-point deficit grow to six (33-27) by halftime. From there, the lead expanded to 47-29 in the first 5:08 of the second half, with the Cardinals scoring eight of their first 14 points via offensive rebounds. The lead was never smaller than 13 for the rest of the game, peaking at 20.

“The second and third opportunities really hurt us,” Pastner said.

A two-play sequence in the second half illustrated the state of the team’s energy level. With a little under 12 minutes left, Wright was not quick enough to a long rebound of a missed 3-pointer by Jordan Usher. At the other end, he couldn’t fight his way through a screen, allowing Louisville guard David Johnson to take – and make – a 3-pointer, one of six he made on 11 attempts. He scored a game-high 24 points.

“Moses usually gets that ball,” Pastner said of the rebound of the Usher miss.

After scoring 20-plus points in six of the previous seven games, guard Jose Alvarado could supply only seven points on 3-for-11 shooting, tying his season scoring low. Alvarado had played the full 40 in Tech’s previous two games. It didn’t help that he was hounded by the 6-foot-5 Johnson, whom Mack called one of the best defenders in the ACC.

“Alvarado’s the engine of their team, and he stalled it (Monday),” Mack said of Johnson.

Said Pastner of Alvarado,”It was probably his worst game in a long time, and when that happens, we struggle.”

Given the circumstances and opponent – which was both rested and in urgent need of a win, having lost three of its previous four – a win on Monday was a big ask. Still, for a team trying to climb into the NCAA tournament conversation, it would have been highly valuable. Earlier Monday, the Jackets received their first points in AP top-25 poll voting since the preseason poll of the 2010-11 season. A win over Louisville and another over Notre Dame, Tech’s opponent on Saturday at McCamish Pavilion, might have even nudged the Jackets into the top 25, ground they haven’t trod since the 2009-10 season, the year of their last NCAA tournament trip.

But, it wasn’t to be Monday.

“We definitely have a long break, so we’re definitely going to break down the game film and everything and put this one behind us,” Wright said. “This was a very winnable game. We all know that. So we’ve just got to focus on what’s ahead, which is Notre Dame Saturday.”