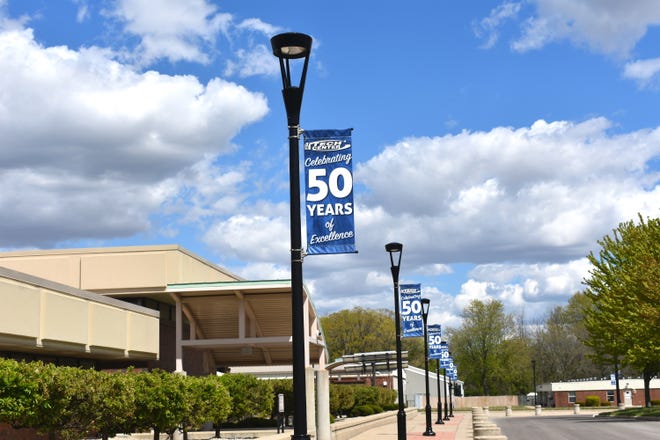 ADRIAN — Fifty years ago, the Lenawee County community showed its support for the creation of an educational center that would not only enhance a student’s career and technical skills but would also serve as a stepping stone out of school and onto the next chapter of their life.

The Lenawee Intermediate School District and its Tech Center continue to celebrate 50-plus years of educational service in Lenawee County this year.

The origins of the then-Lenawee Area Vocational Technical Center began in 1965, when the LISD hired a consultant to prepare for construction of an educational vocational center in Lenawee County. A citizen advisory committee was formed, which called for the center to be centrally located in the county. Adrian was selected as the location.

By 1968, county voters approved a bond issue and a charter millage to construct, equip and operate the centrally located vocational center. Initial technical education programs consisted of auto mechanics, retailing and machine shop. Some of them were held off campus at temporary sites.

In the late summer/early fall of the 1970-71 school year, the Tech Center opened, housing 20 programs with 1,000 students enrolled. Additional highlights were marked years and years down the road, but the beginnings of the Tech Center had taken shape.

“When you go back 50 years ago, the community saw value in career and technical education, and developing students in those skill-set areas,” Kyle Griffith, the assistant superintendent for instruction and general services for the LISD, said. “They have funded that through a millage that goes back 50 years. And since then, they have had some renewals and some upgrade millages that they have supported. For our community to show the support that they do, that comes with great responsibility. We are doing great things here.”

There are now 27 programs offered at the Tech Center along with several college or certification opportunities available.

A celebration put on pause by COVID-19

Because of the restrictions put in place to curb the spread of the COVID-19 virus, a celebration to mark those 50 years of being a part of the educational scene in Lenawee County remains on hiatus.

The Tech Center has surpassed its official 50-year mark, according to Tech Center Principal Jenny Heath. A large-scale celebration had been planned for the start of the 2020-21 school year.

“We hoped to have a spring celebration during the student showcase, and that hasn’t happened either,” she said. “We did have a few programs that actually started out in the community prior to the opening of the building, but it is the 50th anniversary of this building.”

The capsule will be buried directly outside the front entrance of the school. It is intended to be opened during the 100th celebration of the Tech Center.

“When we were asked about making this time capsule, we figured we needed to go big or go home,” Schmidt said.

“Some true talents and what this program has to offer are on showcase right here,” Heath added, when talking about the time capsule.

Pilbeam attended the center during the 1991-92 school year as a junior at Tecumseh High School. She was enrolled in the dental class at the time, where she now leads the program, having done so for nine years.

Pilbeam, a dental hygienist for 25 years, took over the dental assisting program from her former instructor and influencer Jan Sprague, who taught in education for nearly 40 years. She remains in contact with Sprague, who even helps administer yearly dental exams for Pilbeam’s class of aspiring dental students.

“The program has evolved. It is different,” she said. “As technology has gotten better, I definitely teach the course a little differently.”

Graf, a 2007 graduate from Blissfield High School, attended the Tech Center without a clear vision in mind of what he wanted to get out of his time there. It soon became apparent to him that the food industry was his calling in life.

Graf became a student in the Tech Center’s culinary arts program where he said he “fell in love with cooking.” His instruction at the center and the ability to travel and compete across the state at various culinary competitions opened his eyes to what the Tech Center can do for a student’s future.

His ties with the Tech Center allowed him to get an entry-level position as part of the kitchen staff at Michigan International Speedway. For college, his experience at the Tech Center earned him credits at Washtenaw Community College and Eastern Michigan University. He graduated from EMU with a bachelor’s degree in culinary arts, and during his schooling, was able to travel around the country. He even worked with NASCAR as a culinary executive.

“Coming to the Tech Center was a huge benefit,” he said. “It saved me thousands of dollars in my education.”

At the age of 22, Graf became the Tech Center’s culinary arts instructor. It was a position he held for about five years until he moved into his current position as assistant principal of student services.

Graf has called the Tech Center his home — in one way or another — since 2007, when he first stepped onto campus as a senior in high school.

“Eleven to 12 years of my life here is an impactful thing,” he said. “… Being in this place, I wouldn’t have it any other way. I’m here for the long haul.”

Since its opening in 1970, the Lenawee Vocational Technical Center has grown. Here is a timeline of highlights:

• In 2000, voters approved a millage increase after state funding changes lead to a period of financial hardships for the LISD and vocational technical education. The millage increase lead to expanded course offerings and upgraded technology.

• In 2002, a groundbreaking ceremony was held for Jackson Community College’s new campus adjacent to Lenawee Vo-Tech. The partnership between the two institutions lead to new dual-enrollment opportunities for Vo-Tech students. To date, LISD data shows that the Tech Center has served more than 65,000 students.

• In 2008, the LISD Board of Education approved a name change from the LISD Vo-Tech Center to the LISD Tech Center, in an effort to better represent the learning environment and the programs aligned to emerging careers and the incorporation of technology in instruction.

• In 2011, the LISD Tech Center launched its College Now program, providing students with dual-enrollment opportunities at no cost for classes that align with a student’s career and technical education (CTE) pathway. In less than 10 years, the program will have saved students more than $1 million in college costs and tuition, LISD data shows.

• In 2013, a ribbon-cutting was held for the Center for a Sustainable Future (CSF), the first net-zero energy school building in Michigan. The CSF houses three LISD Tech Center programs.

• In 2017, an additional ribbon-cutting was held for the new welding lab at the Tech Center. Recognizing that skilled welders are a needed workforce in Lenawee County, the LISD invested $1.7 million on the expansion, which created 20 student welding stations and added state-of-the-art equipment.

Involvement with Lenawee Now and a 10-year plan

In order to properly meet the needs of local employers, the Tech Center has partnered with Lenawee Now to locate and focus on those jobs that are in demand.

During a March State of the Economy meeting with Lenawee Now, Griffith said, the LISD was informed of a “hot job list” that showed several hot jobs in Lenawee County and what programming was in place at the Tech Center, which highlighted those type of careers. Careers were categorized by nondegree or degree.

A team of Griffith, Heath, Hudson Area Schools Superintendent Michael Osbourne and Tim Robinson, director of operations at Lenawee Now, used the data to come up with the LISD’s CTE 10-year plan for 2020-30.

On the Tech Center’s end, administrators want to make sure all programs are relevant to the current state of the workforce.

“That really should be driving our programming,” Griffith said. “To prepare our students for the needs of business and industry. We want to make sure the pipeline is prepared and ready to go.”