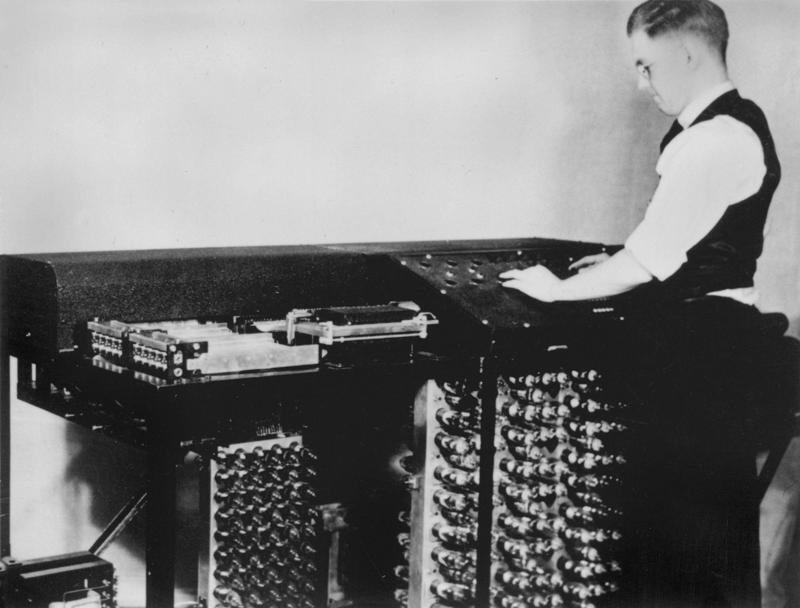 Clifford Berry stands next to the Atanasoff-Berry Computer (ABC).

As the world suffers in the midst of a microprocessor chip shortage (if it hasn’t affected you yet, it will soon with higher car prices, long wait times for smartphones, and fewer laptops and PCs featuring enhanced memory), perhaps it’s time to appreciate an earlier era that provided the computational power we do have.

Only three manufacturers now are responsible for producing nearly all the world’s microchips; Intel provides 80 percent of them for laptops and PCs, TSMC holds the market for smartphone chips at 1.4 billion per year and Samsung alone estimates it has lost $300 million dollars in just three months since assembly was reduced at their microprocessor plant due to a winter storm in Texas.

Intel has broken ground for two new factories in Arizona, but each will cost almost $15 billion dollars to construct and install proper equipment and material for start-up. Just before the shortage began earlier this year, the three major manufacturers brought in $188 billion dollars. Once production ramps up again in Texas and Arizona, that figure is expected to reach as much as one-third of a trillion dollars.

This is in stark contrast to the first electronic computer ever built, the ABC, as it was known, for which Iowa State University invested $650. It was developed and completed by faculty professor and student assistant, John Atanasoff and Clifford Berry in 1939 into 1940.

It was a complex series of hundreds of vacuum tubes used as switches to generate electrical impulses that would be counted in binary code, allowing hundreds of calculations per minute, far more than an abacus or human mind cold ever achieve.

The ABC (an acronym for Atanasoff Berry Computer) was put together in the basement of the Physics Building at Iowa State and went largely unheralded. Atanasoff, the son of an electrical engineer who immigrated to the U.S. from Bulgaria, was more interested in the science of the technology than its marketing as an industrial tool.

As such, in 1941, a young engineer from Ursinus University near Philadelphia, John Mauchly, arrived at ISU and Atanasoff gladly showed the enthusiastic physicist every step in the progress of constructing the computer.

With his extensive duties at the school, Atanasoff had not had the chance to patent the innovative techniques he and Berry had pioneered. Mauchly immediately realized this and returned east where he and fellow Pennsylvania engineer, J. P. Eckert, used the practices seen in Ames to format a computer they claimed to be of their own design.

It incorporated the same vacuum tubes and switches that drove the ABC, but with a lot more of them, implementing more than 17,000 airtight glass cylinders and covering a total of 15,000 square feet. It was based on the same premise that by placing a negative charged element (cathode) at one end of a glass vacuum and heating it by electricity, it releases electrons which quickly are rushed to a small positive charged piece of metal (anode) at the other end of the tube. The switches which can be turned on hundreds of times a minute and all day, thus increasing the speed at which anything can be counted.

Mauchly and Eckert named their computer ENIAC, for Electronic Numerical Integrator Calculator, and marketed it to the Army for enhancing a system to more effectively fire artillery shells. A half decade later, after World War II, in 1951, they completed an even larger version titled UNIVAC, with the computer weighing 16,000 pounds and capable of a thousand calculations per second. It was sold to the Census Bureau and tabulated the nation’s census figures from the year before. That makes June 14, 2021, the 70th anniversary of the introduction of the first commercial (non-military) electronic computer.

Heralded as one of the greatest leaps in technology of all time, the Pennsylvania engineers took full credit for the process and their patents were lucratively bought out by what became the Sperry Rand Corporation, which dominated production of computers for the next decade.

In 1962, however, Iowa State alum and author R. K. Richards, announced he was conducting research for a book on the evolution of what would commonly be known as “computers.” In his quest, he found the original papers of Atanasoff and Berry and interviewed Atanasoff and Berry, who kept better records than his mentor.

Mauchly and Eckert were contacted, but refused to speak privately or publically, only acknowledging that Mauchly had indeed spent several days at ISU in 1941. Richards continued to press the Rand Corporation for information, but received no cooperation.

The entire case gained national recognition in 1963 when Berry was mysteriously found dead at his home with a plastic bag around his head. Atanasoff (and Berry’s wife) were convinced that his partner was silenced.

Berry’s death was officially listed as a suicide and no trial alleging foul play was ever held. The book “Electronic Digital Systems” came out in 1966 and fully asserted Atanasoff and Berry as the true fathers of the 20th century computer.

With this evidence, the Honeywell Corporation, also developing computer technology at the time, sued the Rand Corporation, claiming Rand did not have rights to the technique because the procedures used in creating it did not come from Mauchly, but from Atanasoff at ISU.

Millions of dollars were at stake. The trial remained in the court system for four years. More than 36,000 documents were submitted as evidence and the transcripts of the trial itself covered 50,000 pages.

In the end, in mid 1973, the court stated unequivocally, that Mauchly had “derived” the concept of the electronic computer from Atanasoff and Berry, thus attributing the invention of the computer as it was first conceived, to the Iowa State pioneers.

Today, computers with microscopic transistors (the equivalent of a 1940s vacuum tube switch) contain microprocessors made of silicone that maintain up to 28 billion transistors, each about five nanometers thick, tens of thousands times smaller than the width of a human hair.

In this year of the 70th anniversary, and as we bemoan the shortage of the technology it has led to, may the dearth in microprocessor production remind us of the value that this technology plays in our lives and that the fathers of this technological engine on which the world runs… came from Iowa.